July 23, 2017 · by thesimpleswan.com · in Lessons In Loveliness, Seeking Loveliness · Leave a comment

Do you ever find yourself surfing the television channels, wishing that there was something “good” to watch? We all have our guilty pleasures ~ news marathons, reality TV, or crime dramas. However, once in awhile I find myself at a point where I simply cannot force myself to watch another episode of House Hunters (I know they want space to entertain), The Bachelor(ette)(congrats, it has been an amazing journey), or any crime drama (how in the world could these be based on real-life events?!). I yearn for something pure, sweet, and simple.

So when our modern society overwhelms you with trash TV, natural disasters, or politics, consider excusing yourself for an hour or two. Watch an old-fashioned movie, listen to the carefully crafted dialogue, and transport yourself to an era of glamour and morality. Though the actors, the stories, and the early days of cinema were not without their flaws, the Golden Age of film used beauty and innocence to remind us what it means to have humanity and hope.  A dose of Gregory Peck never hurt anyone either…

A few of my favorite classic films include: 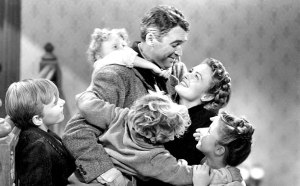 It’s a Wonderful Life (1946) ~ Jimmy Stewart and Donna Reed teach us the value of family, faith, and coming home in this story about God’s greatest gift.

“Strange, isn’t it? Each man’s life touches so many other lives. When he isn’t around he leaves an awful hole, doesn’t he?” ~Clarence Odbody Angel Second Class

Miracle on 34th Street (1947) ~ Is it really silly to believe in miracles?  Young Natalie Wood and Maureen O’Hara struggle to have faith in Santa Claus while John Payne and Edmund Gwenn encourage them to keep believing.

“Faith is believing when common sense tells you not to. Don’t you see? It’s not just Kris (Kringle) that’s on trial, it’s everything he stands for. It’s kindness and joy and love and all the other intangibles.” ~Fred Gailey

Roman Holiday (1953) ~ Perhaps my favorite Audrey Hepburn movie, Gregory Peck’s character joins Princess Ann for a weekend of ambiguity and fun while she weighs her responsibilities against her freedom.

“Reporter: And what, in the opinion of Your Highness, is the outlook for friendship among nations?  Princess Ann: I have every faith in it… as I have faith in relations between people.”  ~Roman Holiday

High Society (1956) ~ Louis Armstrong, Bing Crosby, Grace Kelly, and Frank Sinatra ~ has a more glamorous Hollywood gang ever existed?  Escape to a world of high-class socialites, musicians, and those trying to climb the ladder with this beautiful musical feature about love and Grace (Kelly).

“Tracy: One thing’s for sure. You’re well rid of me. Dexter: Oh, no, no-one can say that but me.” ~High Society

To Kill A Mockingbird (1962) ~ I wouldn’t be an acceptable English teacher if I didn’t recommend that you read the book first.  Having read it as a high school freshman, however, you’re probably good to go. In the film, Gregory Peck plays Atticus Finch, the archetype of integrity, as he stands up for justice in the Depression-era South.

“If you just learn a single trick, Scout, you’ll get along a lot better with all kinds of folks. You never really understand a person until you consider things from his point of view… Until you climb inside of his skin and walk around in it.” ~Atticus Finch

~Think on These Things~

“Film, it has the power to cross generations, cross language boundries, and provoke us to deal with issues in our culture and current belief systems.” Joe Poe